Well summer is done so all the home summer projects are either done or postponed until next year..

Before I did take a break I did finish the two Parlour guitars so they are now up for sale.. The long scale Tenor guitar is almost ready for final polish and buff. and I'm preping for the next builds.

Coming up will be a nylon sting crossover model in Mexican Cypress and Western Red Cedar.

After that one is started I think I'll be working on a new Ukulele design similar to those of Jay Lichty, https://lichtyguitars.com/ukuleles/ Jay has been kind enough to publish his basic design for a larger bodied long scale Ukulele. So I think I'll give a slightly modified version of that a try.

There will also be another L-0 bodied guitar coming as I think that is a great size that fits between the Parlour and OM sizes.

I've also been designing some changes to the basic way I build guitars. For several years now I've done a completely bolt on neck where the fingerboard extension is not glued down to the body and that works but the next logical extension of the is the raised fretboard guitar which will allow future changes to increase the vibrating area of the top> So I'll be doing that on upcoming guitars.

Also I've been looking at arm bevels and scooped cutaways and looking for a way to do them on most of not all guitars with out over complicating things. So to that end I'm going to try some modeled after a version used by Ontario luthier Ted Woodford http://www.woodfordinstruments.com/home.

So That should keep me busy for awhile..

Here are some photos of the completed Parlours 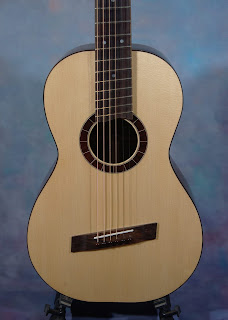 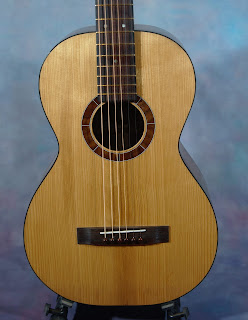 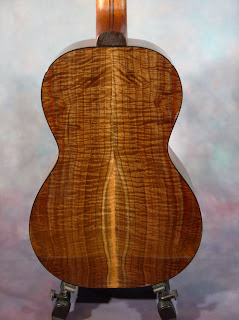